Example from The Book of Kells - "Christ Enthroned" 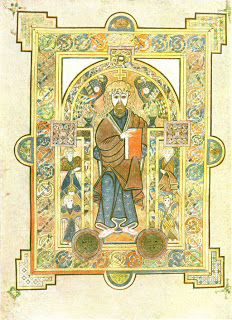 During the so-called Dark Ages, following the fall of the Roman Empire, illiteracy became the standard, the great continental libraries vanished, and scholarship largely ceased to exist. Operating on the fringe of Europe, the newly literate Irish scribal scholars began the monumental task of copying every piece of Western literature they could uncover ... providing a critical bridge between ancient Rome and medieval Europe. (Source: Margaret Flanagan, Booklist)

Many of these magnificent manuscripts, each a work of devotion, are now available online:

One of the most famous Irish illuminated manuscripts is The Book of Kells. The manuscript contains the four Gospels in Latin based on a Vulgate text, written on vellum (prepared calfskin), in a bold and expert version of the script known as "insular majuscule". The place of origin of the Book of Kells is generally attributed to the scriptorium of the monastery on Iona, an island off the west coast of Scotland. In 806, following a Viking raid on the island which left 68 of the community dead, the monks took refuge in a new monastery at Kells, County Meath. It must have been close to the year 800 that the Book of Kells was written, although there is no way of knowing if the book was produced wholly at Iona or at Kells, or partially at each location. (Source: Trinity College Library)

To find out more about the Irish scribes, check out these subject headings in the library catalogue:

Celtic and Anglo-Saxon painting : book illumination in the British Isles, 600-800