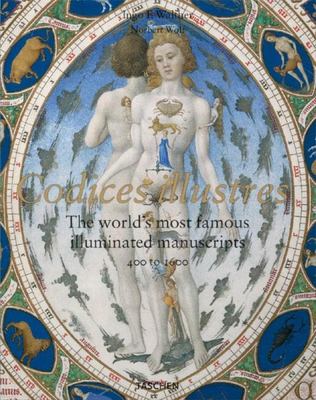 Codices illustres : the world's most famous illuminated manuscripts 400 to 1600

This sumptuous oversize volume (10.5x13") provides the general reader with a pleasant and thorough introduction to the world of illuminated manuscripts. In the lengthy introduction the authors (both are art historians in Germany) discuss manufacture, style, and the cultural history of western manuscripts, plus a history of non- European (mainly Islamic) manuscripts. The catalog that follows gives the manuscripts' vital statistics, including size, number of folios, provenance, and facsimile, followed by a description and history.

The Making of a Medieval Manuscript: illustrates the step by step process of creating an illuminated manuscript

Beginners' Latin: official documents written in England between the years 1086 and 1733 were usually written in a specialized form of Latin. This site leads learners through the basics: no previous knowledge of the language is required.

British Library Glossary: From "acanthus" to "zoomorphic", this illustrated dictionary of terms is a useful tool in the study of manuscripts.

InScribe: This free online course in paleography provides the necessary training required by non-specialists to allow them to explore and interact with medieval manuscripts and documents

For those of us whose Latin is a little shaky, here are some sites that provide medieval documents in English:

Here are a few manuscript scholars to follow on #MedievalTwitter: